Discover the beauty of native plants in distinctive places

Native Plant Trust's eight properties throughout New England form a loose continuum of the region's natural conditions, from cultivated to wild. Our six native plant sanctuaries, in particular, offer a sampling of habitat types, where rare plants thrive in the specific conditions in which they evolved, from sandplains to rich mesic forests: You'll find stunning lady's-slippers sprouting from the mire of a Vermont bog, dozens of fern species thriving on the floor of a rich maple forest in New Hampshire, and more than 100 wildflower species thriving in a forest and marsh along the shore of Maine's Merrymeeting Bay.

At Garden in the Woods, in eastern Massachusetts, you'll experience the most cultivated end of the spectrum on a spectacular site—a botanic garden showcasing native plants on a glacial landscape rippling with ravines and ridges.

Those who visit the seasonal Garden Shop at Nasami Farm, in Whately, Massachusetts, will find a nursery with expansive views of farmland in the Connecticut River Valley, part of New England's largest watershed.

At all our properties, please leave pets at home. Service dogs are welcome.

For the safety of all visitors and the protection of plant collections and other natural resources, we do not allow bicycles, off-road vehicles, and vehicles or other power-driven devices used for mobility assistance (with the exception of wheelchairs and scooters) on the paths at Garden in the Woods or in our sanctuaries. Only the entrance plateau at Garden in the Woods is accessible. The natural terrain of the property is too steep for wheelchairs, scooters, and most other motorized mobility devices and presents a safety hazard to visitors using such devices.

Tucked between the Connecticut River and the White Mountains in northwest New Hampshire, this 260-acre sanctuary is a trove of biodiversity wrapped in the enchantment of a secret garden. Explore groves of beech, birch, and maple; rich sugar maple woods at the base of steep ledges; dense stands of balsam fir and red spruce; swamps of red maple and black ash; and meadows and shrub lands.

The secret of this richness lies in the land itself: The geology, topography, and hydrology range from low-lying wetlands to dry, steep slopes. For at least 200 years, human use—farming and timber harvesting—also shaped this land. Its last private owners, Christina and Sturtevant Hobbs, recognized the property’s unique character and asked the Society to continue the conservation they had begun, donating it in 2004. Today, the surrounding area remains rural, and with no major roads nearby, the property offers not only a sanctuary for native plants and animals, but a peaceful refuge for human beings.

Find gorgeous native plants for your garden, free of systemic pesticides, at our Garden Shops. 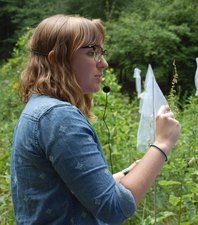 As a member of Native Plant Trust, you get access to special events, discounts on plants and classes, and more. Find the right option for you.